In order to extract ephemeral evidence out of already captured memory dumps, forensic experts must use proper analysis software such as Belkasoft X. Besides, some other tools can be used to extract passwords to encrypted volumes.

Acquiring volatile memory from a computer running a debugging protection or anti-dumping system is tricky. Most memory acquisition tools run in the system’s user mode, and are unable to bypass the defense of such protection system (which run in the systems’ most privileged kernel mode). 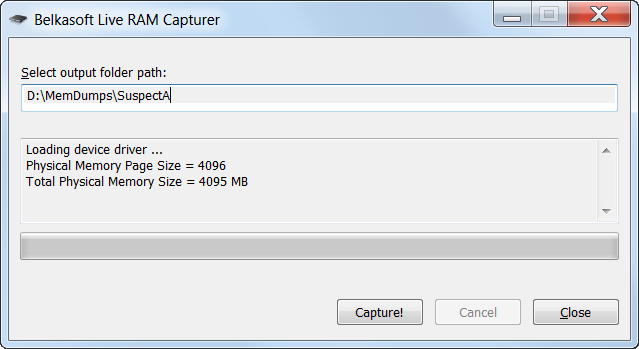 Belkasoft Live RAM Capturer is designed to work correctly even if an aggressive anti-debugging or anti-memory dumping system is running. By operating in kernel mode, Belkasoft Live RAM Capturer plays on the same level with these protection systems, being able to correctly acquire address space of applications protected with the most sophisticated systems such as nProtect GameGuard.

Testing methodology: we launched Karos, a computer game protected with nProtect GameGuard. Then we performed an active chat session, and tried acquiring the complete memory dump of the system with all three memory dumping tools. We then analyzed the memory set belonging to the protected game.

Consequences of Using a Wrong Tool

Many applications protect their memory sets against dumping. Such applications include multi-player online games, malware, custom and commercial products protected with active anti-debugging systems. In mild scenarios (e.g. commercial products and games), an attempt to read a protected memory area will simply return empty or garbage data instead of the actual information.

In worst-case scenarios, an anti-debugging system detecting an attempt to read protected memory areas may take measures to destroy affected information and/or cause a kernel mode failure, locking up the computer and making further analysis impossible. This is what typically happens if a user-mode volatile memory analysis tool is used to dump content protected with a kernel-mode anti-debugging system.

Belkasoft Live RAM Capturer is compatible with 32-bit and 64-bit editions of Windows including XP, Vista, Windows 7/8/10/11, 2003 and 2008 Server. The tool does not require installation, and can be launched in seconds from a USB thumb drive.

Since this article was published, FTK Imager got a kernel-mode driver. However, you may still consider to compare size of an executable file to select a capturer with minimum footprint. See a third-party review at https://thanursan.medium.com/comparison-of-memory-acquisition-software-for-windows-e8c6d981db23